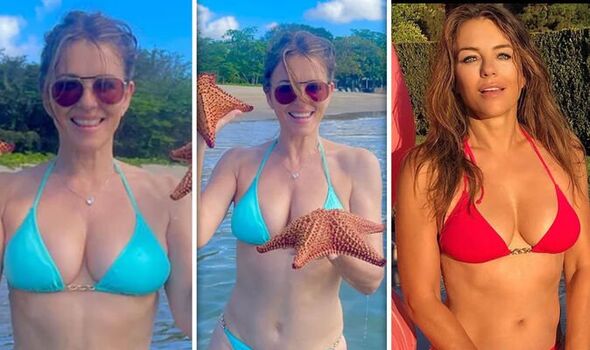 The English actress made the week a little more exciting by sharing a stunning double update with her 2.3 million Instagram followers. The Instagram post featured Hurley enjoying the warm weather in a skimpy bikini that exposed plenty of skin.

Happy In A Bikini

The photos showed the 56-year-old posing in a clear body of water at an undisclosed location. Her lower body was fully submerged in the water, and two large starfish had been placed on her upturned palms. She stood with her shoulders hunched and elbows bent, seemingly to ensure that the sea stars remained on her hands. Hurley faced the camera while flashing a beautiful smile.

In the next slide, the “Austin Powers: International Man of Mystery” star stood in a similar stance. The sandy shores, trees, and the bright blue sky with clouds made up the background of the shots.

Hurley wore a scanty swimwear set with a teal blue color that complemented her flawless complexion. The top featured triangle-style cups and a plunging neckline, which displayed a nice view of her cleavage. Notably, the cups were lined but cut so small that they failed to cover the entirety of her bust. Thin straps went behind her neck, with another pair of strings crisscrossed tied around her back to keep the piece in place. The gold chain that connected the cups attracted more attention to her assets.

She sported matching bottoms with a low-cut waistline, highlighting her taut tummy and defined abs. The waistband was made up of gold chains that were digging onto her skin along the sides of her waist, which helped accentuate the curves of her hips.

The gorgeous brunette had several accessories on with her beach day attire, including a pair of sunglasses and a pendant necklace. She had her hair tied in a low, messy bun with some tendrils of hair falling over her face.

“Found these magnificent starfish, alive but stranded, on the beach,” Hurley wrote in the caption. “they’re now happily back at the bottom of the sea ❤️❤️❤️❤️.”

The share quickly earned more than 117,000 likes and over 1,800 comments. Fans and fellow celebs flocked to the comments section and wrote compliments. Most expressed their admiration for her beauty, while countless admirers raved about her fantastic figure and her good deed. Some followers decided to drop emojis instead of words to express their thoughts about the snapshots.

“How is it possible that you are over 50+ years? This body,” quipped another smitten admirer, adding a flame emoji to the text.

“Thank you for your action, you have done a great gesture for the planet,” noted the third commenter.

“What a beautiful act by such a beautiful lady! If only everyone could be like you,” a fourth comment read.

As fans are aware, Hurley is not shy when it comes to flaunting her amazing figure on social media. In fact, a majority of her Instagram posts feature her posing in revealing ensembles. In February, she a picture in which she wore a yellow string bikini. That post has been liked over 94,000 times since it was shared.

READ MORE:  Cardi B Breaks The Internet With Her Booty, Says She’s ‘Fighting For D*ck’