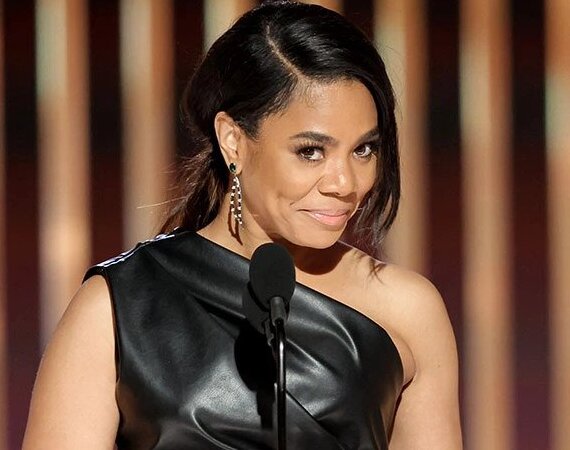 Is it an award ceremony if something controversial doesn’t happen?

It is quite the norm for fans to criticize moments at almost every award ceremony, and the just concluded 80th Golden Globes Award had a scenic moment that kept fans wagging their tongues.

It happened that Regina Hall seemingly threw a poke at Kevin Costner for his absence at the Golden Globes Award, and fans weren’t so quiet about the joke.

Regina Hall Joked At Kevin Costner’s Absence At The Event

In a viral clip circulating the internet, the ”Little” actress came on stage to present the award for the best performance by an actor in a television series – drama in which Costner emerged as the winner. In giving her speech, Hall joked about Costner’s absence and burst into laughter.

The “Think Like A Man” actress further shared that the 66-year-old’s absence was “because of the unprecedented weather and flooding, he has to shelter in place in Santa Barbara.”

Again, Hall laughed out loud before beckoning the audience to pray for the star actor and those affected by the storm.

Before the prestigious ceremony, Costner had issued a notice of absence on his Instagram, imploring his fans to forgive him. The father of nine disclosed that he and his family had unfortunately gotten stuck because of the storm. Additionally, he expressed that he was sad he missed the event and apologized to the cast members of “Yellowstone.”

Regina Hall finding out why Kevin Costner couldn’t be at the #GoldenGlobes just won next year’s #GoldenGlobes for Best Actress in a TV Comedy pic.twitter.com/5WjI6zosdn

Filling up the comments were several messages from fans who expressed concern for his safety. A fan penned, “As long as you and your family are safe – that’s all that matters.”

Despite the audience at the Golden Globes finding Hall’s presentation hilarious, that wasn’t the case online. Many fans were not impressed by the “Honk For Jesus” star’s jokes on Twitter as they criticized her for laughing about something so life-endangering.

Some fans even brought gender and race stereotypes into play. This Twitter user painted this picture, writing, “Imagine if a white man had accepted an award for a black woman and behaved in this smug, condescending manner. All hell would break loose.”

Former radio host John Ziegler also shared this point of view, tweeting, “Uh, can you imagine if the races/genders of this Kevin Costner #GoldenGlobes2023  situation were reversed?!” One netizen attacked the “About Last Night” star’s professional ethics, writing, “Regina Hall was so rude and disrespectful to Kevin Costner, cast of Yellowstone and all the people of Santa Barbara. Wow, she needs a lesson in professionalism.”

Another observer noted his shock at Hall’s behavior, and another claimed the actress belittled the sufferings of Santa Barbarians with her joke.  A fan had this to say to the 52-year-old actress. “Shame on Regina Hall for feeling that there is comedy in the fact that Kevin Costner was stuck in Santa Barbara. Are people oblivious to the fact of the massive flooding in SB and the fact that the freeways between SB and LA is closed? WTF is wrong with people? ”

However, it wasn’t all negative reactions, as some followers managed to find the humor in Hall’s act. A fan tweeted, “People really butt hurt over Regina Hall making a small joke about why Kevin Costner isn’t at the Golden Globes…Get a life.”

An admirer couldn’t help but applaud Hall’s behavior, and another who fully understood the joke took the liberty of explaining it. The user tweeted, “Regina Hall was not mocking actual victims of these storms. She was mocking Kevin Costner in his mansion in Santa Barbara, which was a mere 2-hour drive from the awards. She was right. And hilarious.”

The “Yellowstone ” Star Bagged An Award At The Golden Globes

Although the “Waterworld” actor was absent from the event, he won the award for his role in the television series, “Yellowstone.”  Costner was nominated alongside Jeff Bridges (“The Old Man”), Diego Luna (“Andor”), Bob Odenkirk (“Better Call Saul”), and Adam Scott (“Severance”).

This marks “Yellowstone’s” first Golden Globe win from its first air. The series, which had its two prequels released in “1883” and “1923,” was re-launched in 2018, imbibing a Western genre.