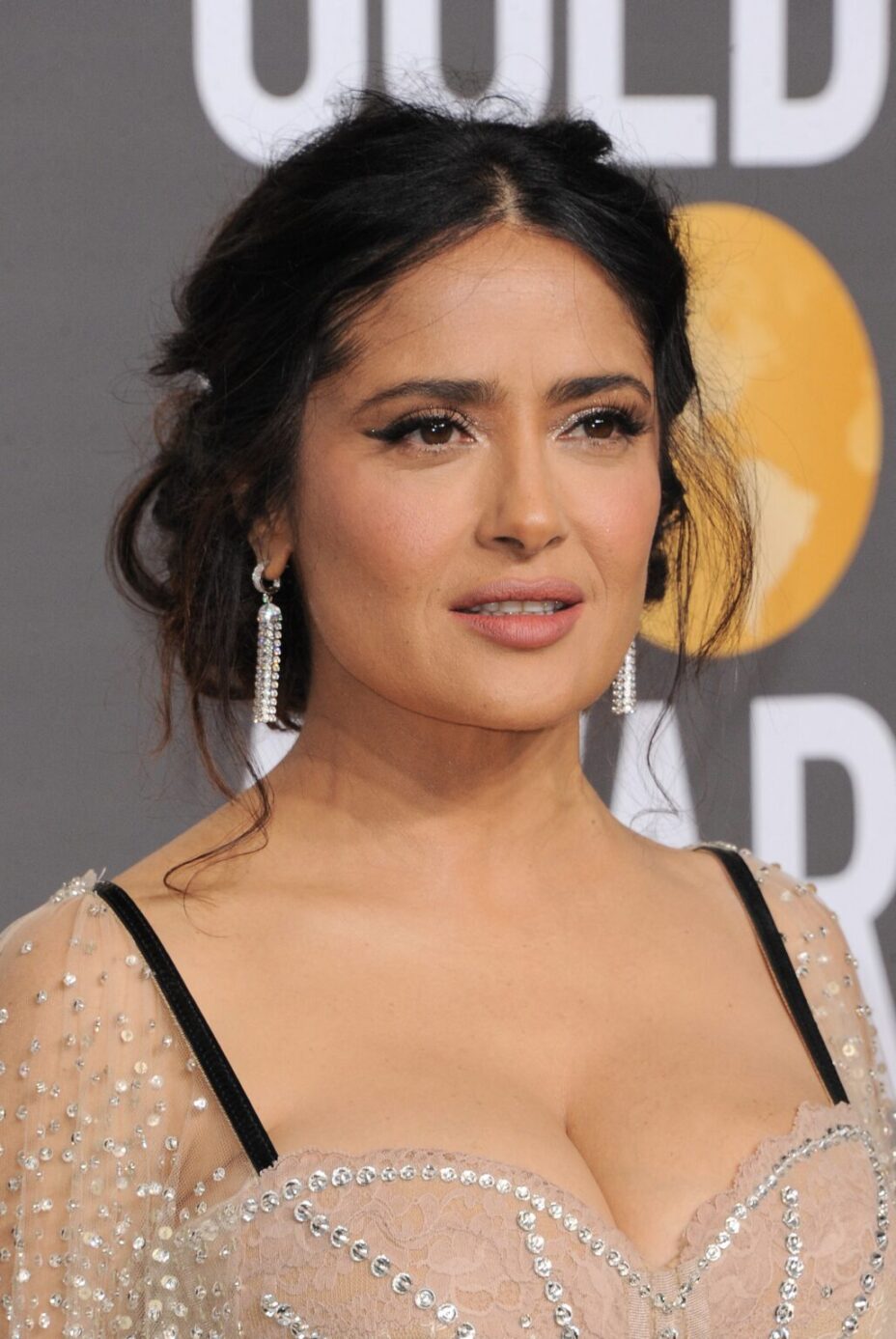 Actress Salma Hayek is turning heads in the gorgeous dress that she wore for the 2023 Golden Globes earlier this week.

She attended the event in a sheer dress that hugged her curves, leaving many fans in awe. This prompted the Marvel’s “Eternals” actress to take to Instagram on Wednesday night to reveal just how she was able to pull off her iconic look.

The “Frida” actress walked the red carpet at the Golden Globes in a plunging dress with a sweetheart neckline that almost perfectly complimented her skin tone. Her wavy dark hair was pulled back in an elegant updo, leaving only a few strands free to frame her face and reveal dangling silver earrings that matched the silver ornamentation on her dress.

The dress itself featured thin black straps along the sleeves, which Salma matched with short dark nails. The rest of her outfit consisted of a sheer, light pink gossamer material that draped all the way down to the floor at her feet, hiding her heels.

A silver beaded pattern started at her core and wove its way out to cover each part of her dress, where it hung off silver tassels in the bottom folds of her dress. The short sleeves also featured tassels hanging off the ends of her sleeves, landing right above her elbow.

The rest of the sleeves looked practically see-through, studded with more silver beads and more silver ornamentation. On her Instagram page, the “Hitman’s Wife’s Bodyguard” star also gave fans a rear view of her jaw-dropping dress.

‘I wish I could tell you I arrived on a plane from Europe, woke up like this…’

In her Instagram post, the “Desperado” actress shared a few stunning behind-the-scenes looks at her dress, including one that featured a rear view of her curve-hugging dress. The silver spiral pattern that was seen radiating out of the front of the dress also extends to the back of the dress, which features silver trim along the neckline to show off the top of her back.

The dress perfectly hugs her curves, wrapping silver beaded bands along her lower back, all the way down to her upper thighs. There are more silver tassels that can be seen hanging from the layers at the bottom of her dress, although it still drags along the floor as she walks, hiding any heels that she might be wearing.

In the caption, the “House of Gucci” actress revealed that she had an “army of skilled soldiers” to help her pull off her latest award show look. “I wish I could tell you I arrived on a plane from Europe, woke up like this, and easily just slipped into a dress, but in reality, it took a beauty army of skilled soldiers to get me together for the #GoldenGlobes red carpet last night!” she wrote. “Thank you to @gucci, @boucheron, and my entire crew!!”

She thanked @jennifer_yepez for helping her pull off her hair-do, @maryphillips for doing her make-up, @kimmiekyees for her dark nails, and both @rebeccacorbinmurray and @nataliehoseltonstyle for “styling.”

If the photos weren’t enough, the “Grown Ups” actress also shared a fourteen-second video that features her posing in front of a large green plant. Fans can really make out her make-up in this lighting, matching a light pink lip with shimmering eyeshadow to match her dress. She also accessorized her look with winged eyeliner and a bit of blush on her cheeks.

Her famous friends couldn’t get enough of her sultry snaps or her video. In the comments, “Eternals” costar Lauren Ridloff teased, “Magnificent. Are you a vampire? Or an Eternal?”

“She looks amazing for her age. Almost thought this was a throwback pic in the first slide,” one fan commented. “She is literally the most beautiful woman on the face of the earth!!” another follower agreed.