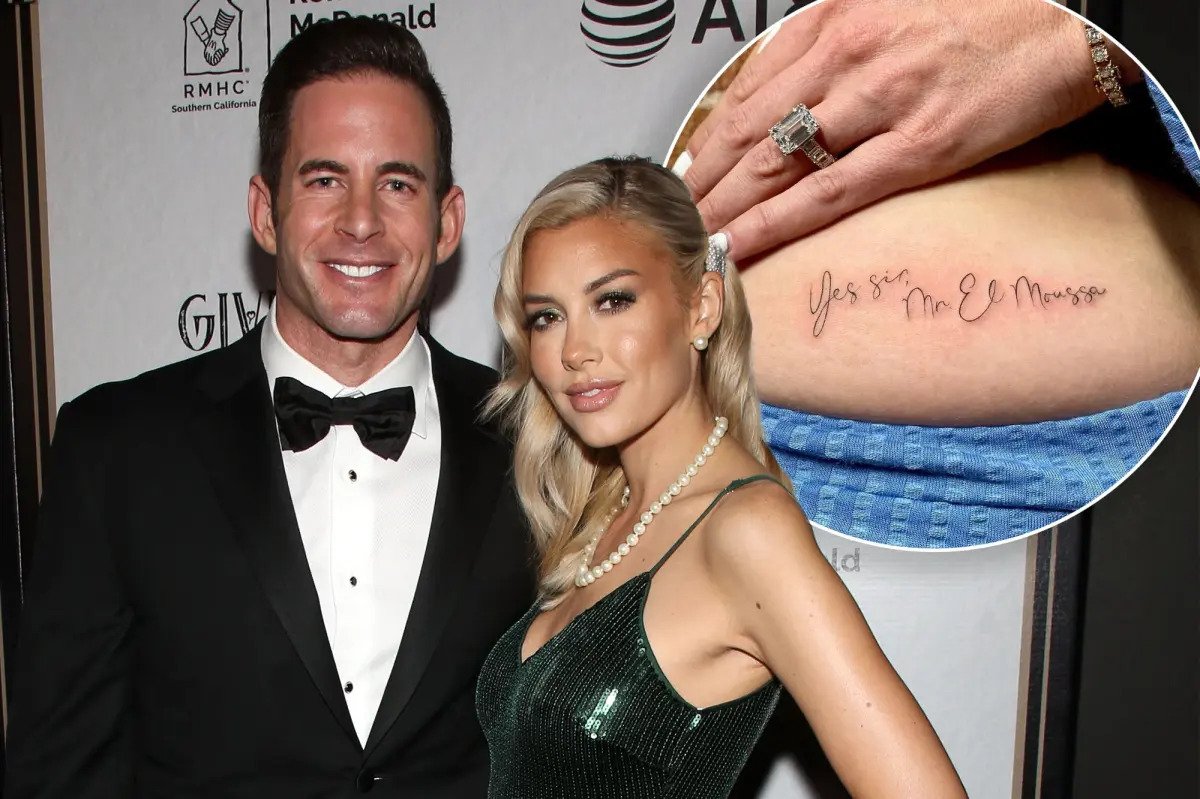 It is no news that the pair started dating in 2019, a year after Tarek divorced his ex-wife Christina Haack now known as Christina Hall. In October 2021, he married Heather in a lovely service at Miramar Beach in Montecito.

Their relationship has sparked lots of talk on social media as they constantly showcase their passion for each other, including in one of their latest Instagram posts.

On the other hand, the second slide was a photo of their hands clasped together and rocking another set of tattoos on their inner wrist.

Thousands of fans reacted to the post, but not all were taken with the illustrative expression of love. Nevertheless, a few could relate to the ink as they shared tales of their wedding anniversary in the comments.

About an hour before the 34-year-old posted the cute photos, Tarek shared a similar one on his page, but his included three shots. They all visibly showed the couple’s new body inks, and the lovebirds appeared to be on a boat’s deck when taking the pictures.

The TV personality continued, “This time, it’s not an all-black crooked tribal on my back [three laughing emojis], it’s something extremely meaningful. And because it’s meaningful, it feels different, and I’ll always love it!

Tarek further detailed how their tattoos came about, saying he and Heather initially decided to get just their wedding date. However, he later realized he wanted his children’s birthdays and his spouse’s initials.

The message concluded, “So now, I have 3 special dates and Heather’s initials on my left arm. We also left some spots open for future kid/kids, yes, I said it [red heart emoji].”

The much-loved real estate expert did not leave his fans out in his caption as he asked for their opinion and whether they had any meaningful tattoos.

Compared to Heather’s post, Tarek’s did not receive much criticism as fans commended the idea while sharing their unforgettable tattoo stories.

Last October, The Blast shared details of the lovers’ wedding ceremony, held on a Saturday after a joint memorable bachelor and bachelorette celebration.

Heather was stunningly dressed in a Galia Lahav bespoke corset dress for the special day, while her groom looked dashing in a patterned black velvet tux.

The glorious classic-themed event took place in an extravagant hotel close to Santa Barbara. There was a combination of black, white, and champagne gold hues exquisitely decorating the venue.

The ‘Selling Sunset’ Realtor Plans To Have Kids With Husband, Undergoes Fertility Procedures

As The Blast previously reported, Heather and Tarek have been public about their desire to have kids. However, there have been a few challenges along the journey.

Last December, the real estate agent detailed her fertility journey as she hoped it would help some women. The process started with freezing her eggs, and in a TikTok video, she showed her in a fertility clinic where she had just concluded an ultrasound.

Prior to the recording, Heather had already undergone a medical check-up for her follicles. She revealed that she had six follicles and a cyst. However, the cyst was not alarming as it only needed to be examined.

Since no follicles were present in the cyst area, the Californian actress stated that her egg freezing process would begin in January, provided she and her husband were willing to move forward.

Her eggs were “on ice,” but she also needed to have her blood tested to reveal her egg count and progesterone levels. The test made her anxious as she confessed to previously having low fertility and low egg count.